The installation instructions through this video series will ensure the products being installed will operate properly and last over time through the weather elements.

Part 1 of the installation series covers different wall types as well as different types of siding and how they all play a big part in how water drains away from the structure and how to install in order to prevent leaks.

Watch all 7 installation videos of the Marvin Integrity Installation Series found at the right to learn the ins and outs of Marvin window installation. Also, click the link below to view the Marvin products that GNH has to offer.

This DIY topic was submitted by local carpenter Bob Mullens. After you build a bench for yourself, think about building a second bench to donate to someone who could use one. Bob was kind enough to build a bench for the GNH Windham location after the Hurricane Irene flooding.

Determine the Width of the Base 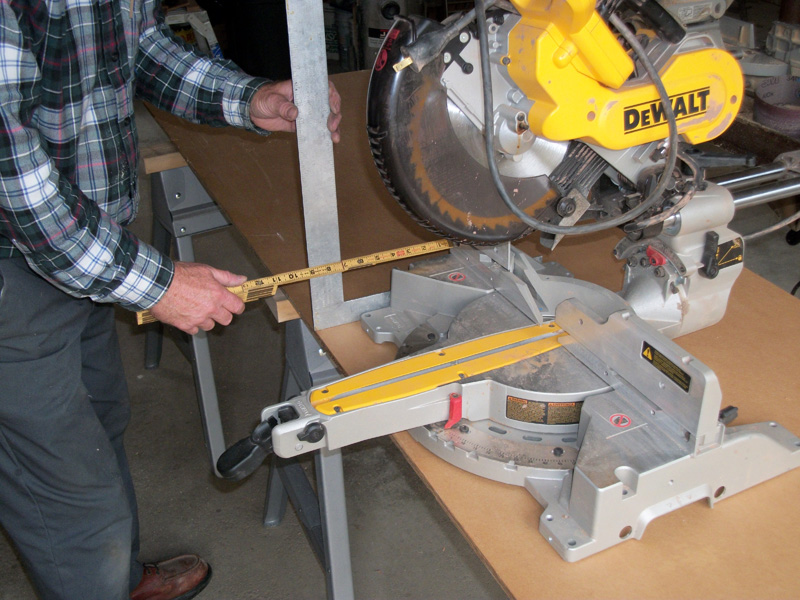 Building the Rails and Base

2c. Using construction adhesive and (1) inch roofing nails, nail the (2) inch CLEAT to the (3½) RAIL, keeping the bottom edge even.

Note: Assemble the BASE and RAILS on a level surface to keep the bench from developing a sag. You might want to use three sawhorses. 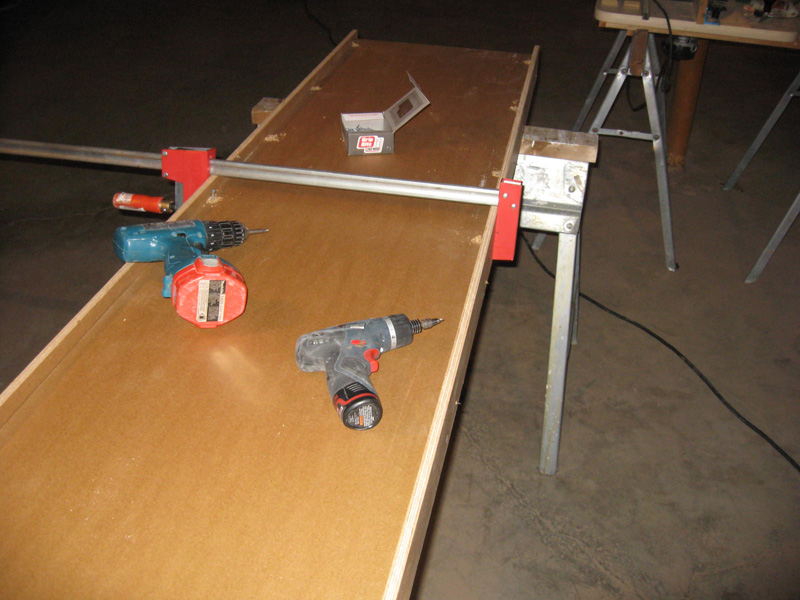 Determine the Ribs of the Miter Saw Bench

Note: A RIB less than (3) inches will not allow electric boxes to be installed in them. You could rip the RIBS (3) inches and then build up the saw. 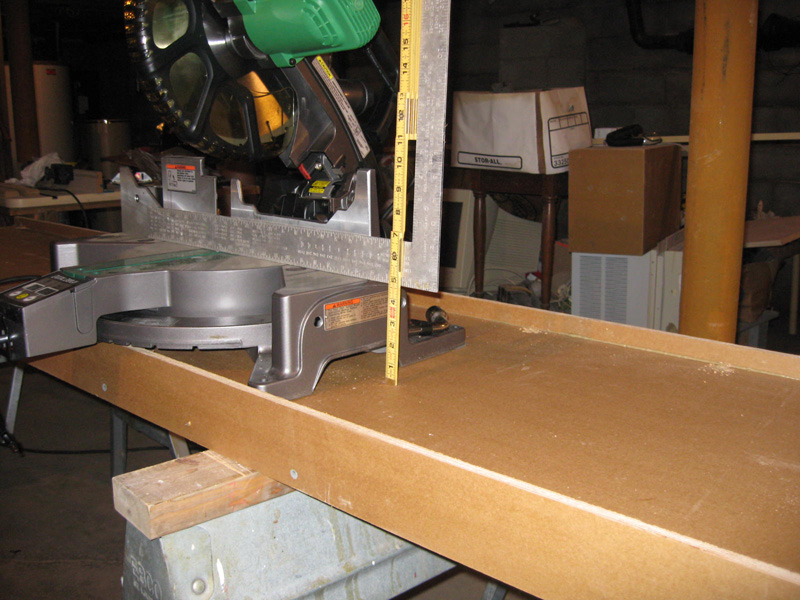 4b. On the right end of the BASE install the first RIB, using a bead of construction adhesive and (2) (1¼) inch flathead wood screws. Drill and countersink holes through the RAIL and into the RIB.

4c. From the first RIB, measure over (20) inches and install the second RIB. Square the second RIB with the base.Note: (20) inches is a good measurement for most saws; A large saw needs to be moved to the right. The center of the saw should be about (36) inches from the right side of the bench.

4d. Place your miter saw on the BASE, (3) inches to the left of the second RIB. The saw sits back from the front of the BASE the distance you measured in [1.a], the distance from the front edge of the plywood to the front feet of the saw. Place, but don’t fasten, the third RIB (3) inches from the left side of your miter saw. You will need at least (3) inches between the saw and the RIBS for your hand to move the wood that you will be cutting. Before you glue and screw this RIB, check the swing of the arm of the miter saw. If it is a compound miter saw, then tilt the saw to (45) degrees and swing the arm to see if the RIBS are in the right place. If your saw needs more space to work, then move the third RIB to the left.

Note: You might have to cut some of the front RAIL for the miter saw arm to swing smoothly.

4e. Install the forth RIB half way between the third RIB and the left end of the bench.

4f. Install the fifth RIB on the end of the bench. 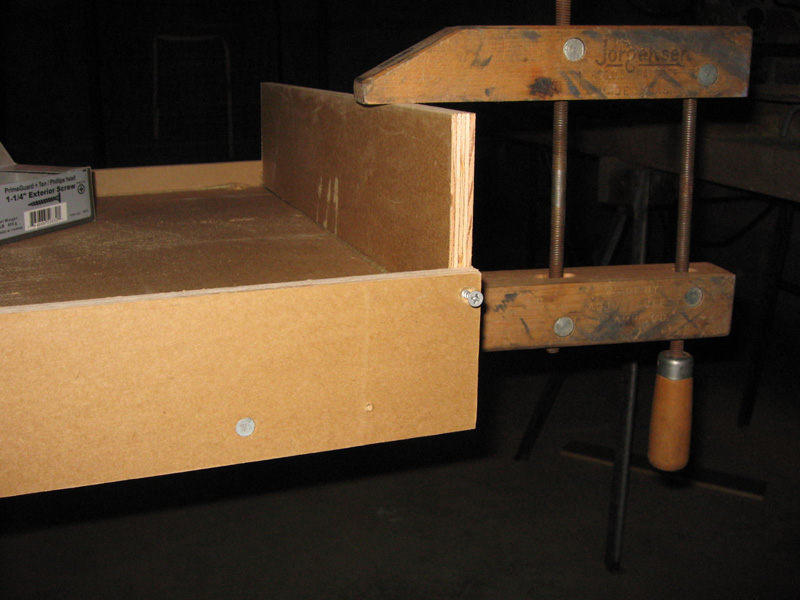 Aligning the Miter Saw on the Base

5b. If the saw has a back extension, then cut a (5) inch piece of (1×1½x⅛) inch aluminum bar and slide it under the back extension.

Determine the Width of the Deck

6a. The DECK‘S width is the 9 inches from line [1.a] (or an adjustment that you had to make) plus the width of the FENCE which (is 1½”). Most likely yourDECK will measure (10½) inches. Rip the DECK‘s width from the MDO sheet.

Backing for the Three Electric Receptacles

7b. Cut (3) pieces of RIB material to fit between the (5) RIBS. In the center of each piece, cut a hole for an electric box.

7c. Install the electric box backing using construction adhesive and screws. Install the backing in line with the front pencil mark on the ribs. When the DECK is placed on top of the RIBS, the electric backing will be (½) inch back from the edge of the DECK.

7d. Install (5) pieces of (1×2) pine from the front of the RIB to the electric box backing, even with the top of the RIB. These are the cleats for the DECKS. 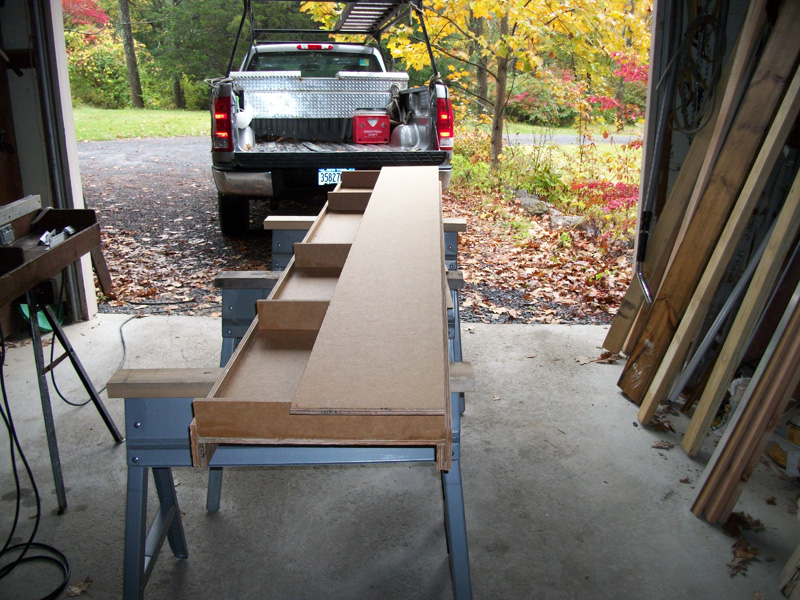 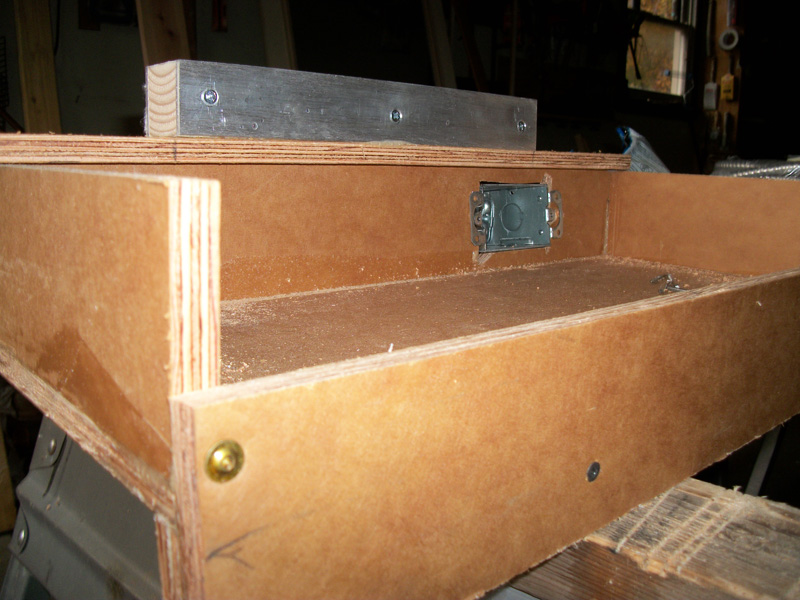 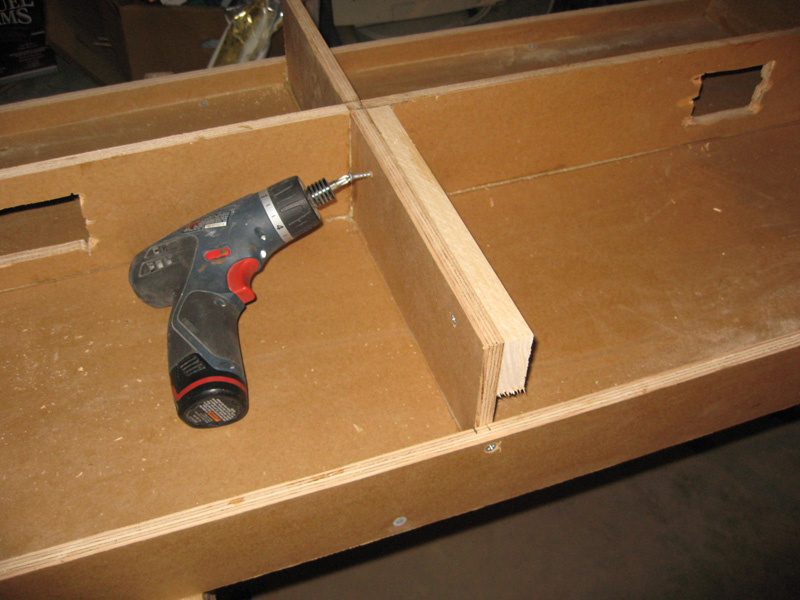 Building the Decks and Fences

8b. Rip a (2x4x8), (1½) inches by (1¼) inches. This will be the FENCE. Place the miter saw in its place on the miter saw bench. Some compound miter saws have parts which slide past the base of the saw. If this is your case, then allow the parts to slide. You should also tilt the saw to (45). Cut the left fence the length of the left DECK or the length of the DECK minus any projection of the saw base.

8c. Cut the right FENCE (16) inches. The FENCE is not cut to the full 20 inches so the right end of the bench can be used with a router, where the FENCE might interfere with the tool.

8d. Install pieces of (1½ x ⅛) inch aluminum bar stock to both sides of theFENCES. The aluminum should be put on the (1¼) inch side of the FENCES. The FENCES should now measure (1½ x 1½) inches.

8e. Fasten the FENCES to the DECKS.

9a. Drill (2) #11 holes in four aluminum angles which go under the feet of the saw. Position the holes at the ends of the angles, so that the pop rivets will not interfere with the saw’s feet. 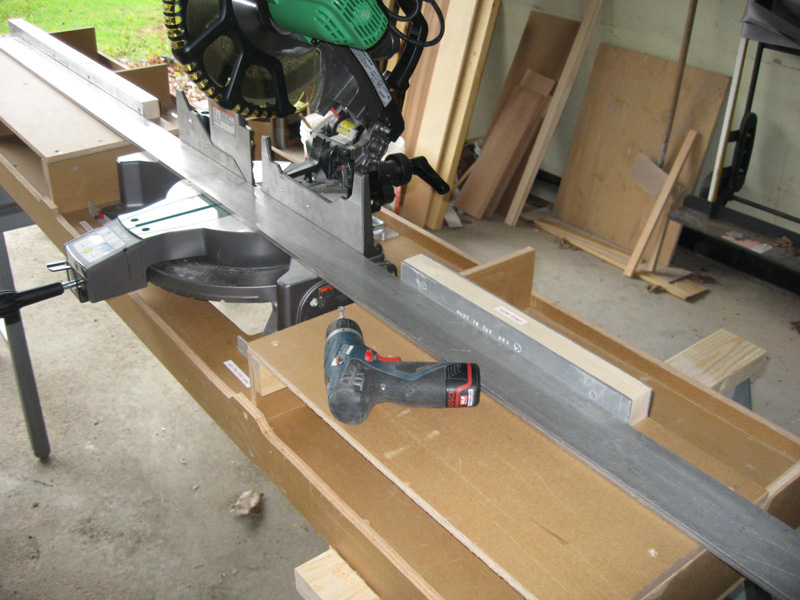 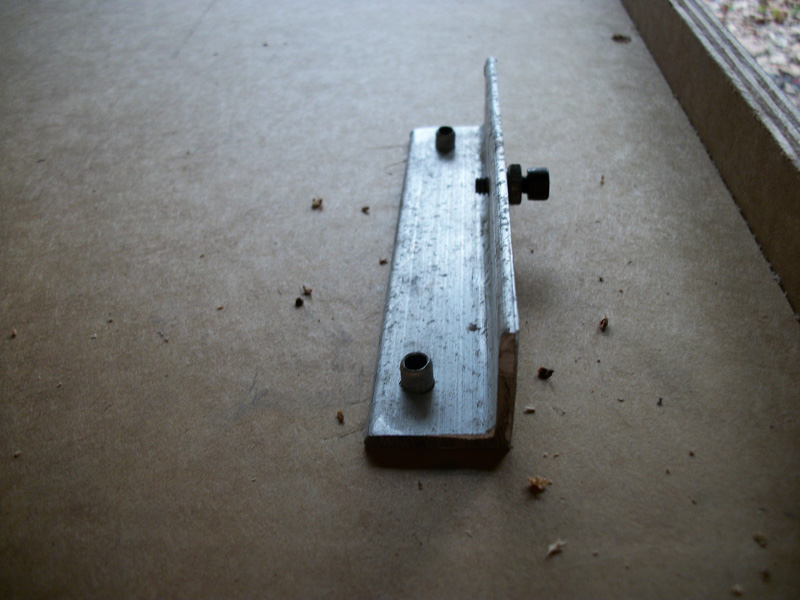 Installing the Two Decks and the Saw

10a. Before you install the DECKS you should have a qualified electrician wire the electric boxes.

10b. You are going to fasten the saw to the BASE and the DECKS to the RIBS now. Set the miter saw in its place on the BASE, slide the aluminum angles under the saw’s feet. Place the short DECK on the right side of the bench and the longer DECK on the left side of the bench. Using a straight edge, line the miter saw up with the two DECKS. Keep the fronts of the DECKS even with the front corners of the RIBS. Pop rivet the aluminum angles where they meet the saw on the DECK. Pop rivet a (4) inch aluminum angle on each side of the front feet to keep the saw from moving side-to-side. Drill and countersink holes through the DECKS and into the cleats. Screw the DECKS into the cleats using (1¼) inch wood screws. Do not glue the DECKS to the cleats so you can access the electric boxes. If someday you have to re-align the saw, do it by moving the DECKS, not the saw in its holder. 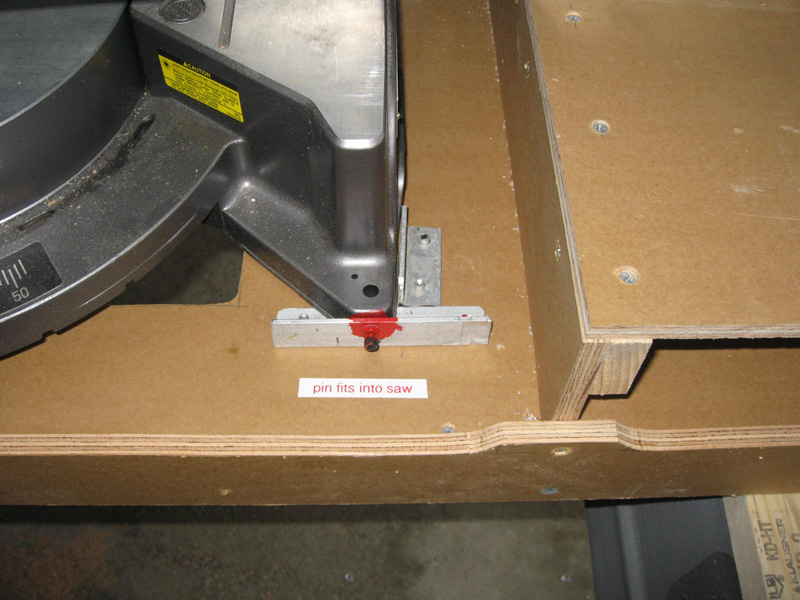 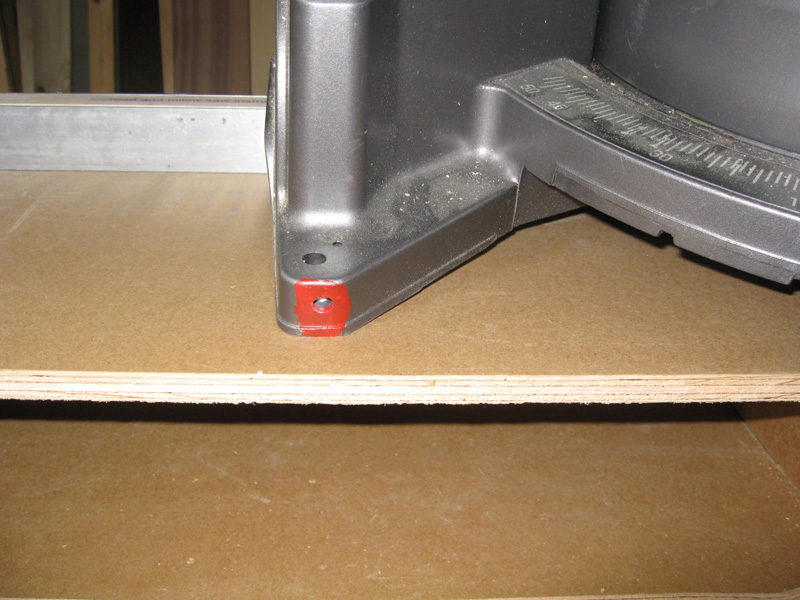 How to Use the Miter Saw Bench

The miter saw and bench are to be used by responsible woodworkers, 18 years of age or older. The saw and bench are designed to cut wood moldings, shelving and framing lumber. This power tool and bench are inherently dangerous; using them could cause physical harm to the operator.

To set up the bench and miter saw

Place the saw horses on dry and level ground.

To place the saw in its holder, lift the saw and tilt the front legs of the saw into the pins coming through the 1×1 aluminum angle brackets.

Read and follow the directions which came with the saw.

Thick pieces of wood sourced from a local sawmill provide a sturdy base for a large slab-topped sofa table, put together with loose tenon joinery. The bark is removed with the draw knife, and the top leveled off with a planer. The legs are tapered and cut with a template:9 3/8″ on one end and 6 1/2″ on the other. The loose tenon joinery is created with the mortice cutter and glued on the endgrain. After attaching the legs, secure them in place with a band clamp.

Maker 101 is geared towards people who are just getting started in making and DIY. These videos are meant to give you a high level overview of tools and techniques to help you get started in making your projects.

Use a laser light to line up the position of the holes to be drilled for the can lights. Drill the hole in a space where it can be connected to a joist. To see if the light placement is alright, push a coat hanger wire through the ceiling before cutting the hole. If the position is right, then the hole can be drilled with the Hole saw. Position the can light over the hole and then nail it to the joist. Nail the light braces to the joists.

Watch the video to find out how the house is put together.

This is a really nice looking mailbox with a newspaper slot under the box and a nicely gauged phinneal top. The entire mailbox is placed over a pressure treated 4 x 4 post that is set in gravel. The plywood is angled and the mitered corners are cut for biscuits and glued. Wstch the video to see how this beautiful mailbox is constructed

Have you got an undulating backyard, a spot you can’t use or do you simply want to beautify your yard? Well Rob can help you get over all three problems with a bridge. This is a fun DIY project with simple materials and 5 steps to creating a small masterpiece.

This is a beautiful design for a picnic table, not simple to build but worth the time!

Print out the plans and the Wood cut list by downloading this PDF:
This Old House, Printable Plans

Build this pallet compost bin in minutes! Turn those unwanted wooden pallets into something environmentally friendly, like a compost bin. This tutorial shows you how to build one in minutes.

Tip: You can attach your pallets together with zip ties or screws, screws will create a more sturdy bin, but zip ties are a good alternative that require no power tools.

Repair broken edges and corners on concrete steps, curbs, slabs and walls without the use of forms with QUIKRETE Quick-Setting Cement, along with QUIKRETE Acrylic Fortifier.

Step 1:
Clean the surface of the damaged area by removing any loose material such as dirt, oil, or grease and unsound or flaking concrete.

TIP: unsound or flaking concrete can be removed by using a hammer and chisel or with a masonry grinding disk and a portable drill.

Step 2:
Scrub and clean the surface of the repair area with a stiff bristle brush.

Step 4:
Mix the Quick-Setting Cement using a margin trowel by adding 5 parts Cement to 1 part QUIKRETE Acrylic Fortifier until a lump-free, putty consistency is achieved. It is important not to add more water or Acrylic Fortifier after the material has begun to set.

Step 5:
Dampen the repair area with enough water to saturate the surface (any standing water should be removed).

Step 6:
Use a masonry brush to apply a thin coating of the Quick-Setting Cement and Acrylic Fortifier mixture.

Step 8:
Continue to build and sculpt the Quick-Setting Cement so that the surface of the repair is above the surrounding concrete.

Step 9:
In about 5 to 10 minutes once the patch has become thumbprint hard, use the edge of a margin trowel to mold and shape the repair to match the contour of the surrounding concrete. 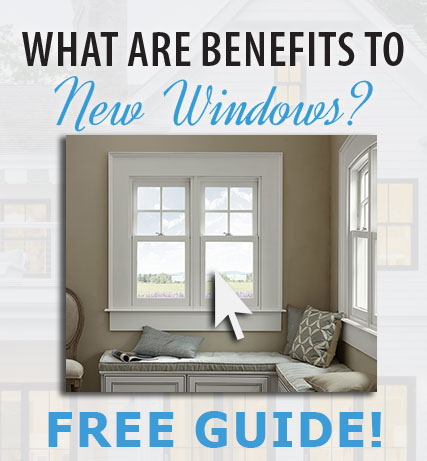